The year of 1931 was clearly a vintage one for the South of England. A new Sadlers Wells Dance House building was opened in London, John Le Carre and Sir Terence Conran were both born (in Poole and Kingston respectively), and a Breed Society dedicated to the Irish Terrier "Fancy" in the south was formed.

The 20s had been a strong decade for Irish Terriers with Ch War Bonus, Ch Celtic Patriot (twice) and Ch Celtic Timothy taking four Crufts Terrier Group wins between them.

An application was made to the Kennel Club in February 1931 for the registration of the SOUTHERN IRISH TERRIER BREEDERS SOCIETY and permission was granted on March 17th. It does seem very appropriate that a Society focused on Irish dogs was born on St Patrick's Day! The first President was Mr L H Twyford (Ryeham). 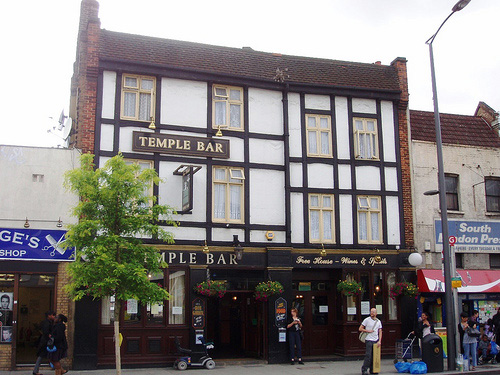 In the 1933 Yearbook iTemple Bart states that the Society's headquarters was the Temple Bar, left, an Irish pub located at 286 Walworth Road, London (just along from the Elephant & Castle). this was probably the "local" for one of the Vice-Presidents, Mr E Cohen (Strongheart) since he lived at number 271. At that time an incredible 69 Irish Terrier breeders were listed for the London area so I am sure that the meetings in this location had great craic. Sadly this pub closed during 2011. 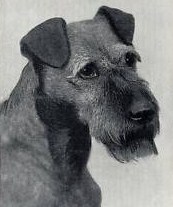 Some other early prominent members were Mr E S Hertz (Venlo), Mr A JShore Road Pal Edwards (owner of Shore Road Pal, pictured on the left) and Mrs G D & Mrs E M B Moore (Russetone). Mr Hertz was considered a great authority on the breed and was asked to give a lecture to the Society members in 1933 where he told them that "The Breed, unfortunately, has of recent years suffered more than others from a paucity of knowledgeable and fearless judges".

The first shows were held in London Halls such as the Horn's Inn Hall near the Kensington Oval, Trinity Hall in Great Portland Street and Lime Grove Hall in Shepherds Bush. The early Society Secretaries were Mr C W Prow and Mr G L M Henry.

The initial subscription fee was 5 shillings and in Mr Twyford's adverts at the time he stated that "I will pay one year's subscription to every purchaser of puppies who exhibit them". Another nice touch is noted at a Society Dinner Dance in 1934 where the menu cards featured dishes named after the famous breed affixes of the day - Merrey Potatoes, Pathfinders Jellies and Breezy Biscuits.

In February 1935, the application was made to change the title to the SOUTHERN IRISH TERRIER SOCIETY. We believe that this was to extend the membership from just purely Breeders to include exhibitors, pet owners and other people interested in the breed. 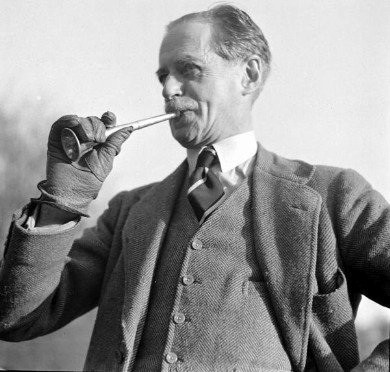 From the outbreak of war in 1939 until 15th April 1947, the club was inactive but retained it's title annually at the Kennel Club. Post-war PAGE 24 Sir Jocelyn Lucas 2an announcement was placed in the Canine Press by Mr A F Demaine. This quickly brought support and the nucleus of the new-born club was formed under President, Miss F M Simpson (Merrey), Chairman, Mr Geo Barr (Brantvale), and fourteen Vice Presidents. These included two Members of Parliament (Sir Jocelyn Lucas and Gilbert McAllister) plus Lady Dent (a previous Secretary and later President of the Irish Terrier Association) and Lady Hehir. Sir Jocelyn Lucas, pictured right was a great working Terrier man who initially bred Sealyhams and then mated them with Norfolk terriers to produce Lucas Terriers. 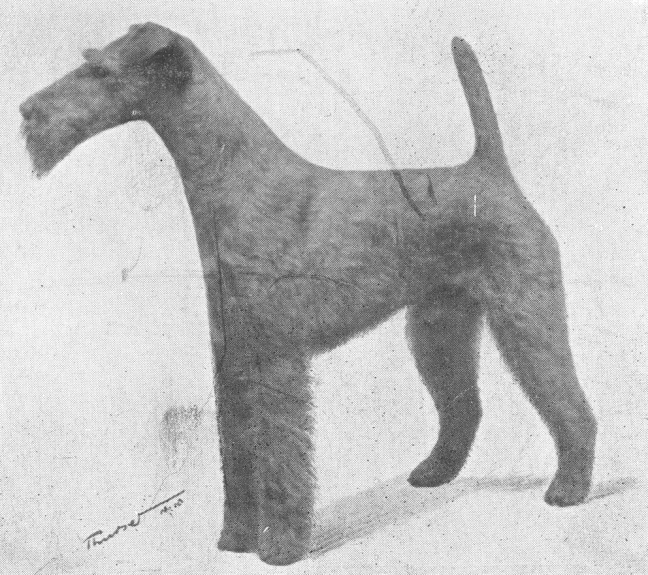 Through the untiring efforts of the Hon Secretary, Mr H Phipps, membership grew rapidly, although he sadly had to retire later in 1947 due to ill health and Mr A F Demaine took over. In that year it was decided to award the SITS trophies at other Shows classifying Irish Terriers until the Society was back to full-strength. Winner of the SITS trophy in 1939 was Moore's Russetone Simon (pictured left). This influential dog won his first CC at Richmond in the same year but then had to wait until after the War to compete again and be made up as a Champion whilst a Veteran. He sired many winning dogs including Int Ch Russetone O'Shaunessy who is to be found in many of the Pathfinders pedigrees.

In 1948 membership was up to 98 and the first post-war Open Show was held on January 10th. Mr E S Hertz judged the 108 entries (from 54 dogs) and awarded Best of Breed and the princely sum of £1 (over £30 in today's money) to Davies' Glanyrafon Chief. Around this time the London & Provincial Irish Terrier Club was merged into SITS and it was noted in the Society Minutes that "some very good cups were transferred over".

The first Southern Irish Terrier Championship Show was held on 27th March 1954 at Lime Grove Hall, Shepherds Bush, London. had an entry of 123 from 90 dogs and the Judge was Mr A J Edwards. He awarded Best of Breed to Jordan's Intl Ch Chip Ryan (pictured). There was also a parade of Champions at the Show involving 16 dogs, it must have been quite a sight.

In the 1950's, Mr Demaine handed over the Secretary role to Mrs N B Houlden (Meranti) whose most famous dog was Ch Meranti N' Changa Copper who took 4th place in the Terrier Group at Crufts in 1958.

In 1961 Ms Norah Woodifield (Pathfinders) took over as Secretary. A highlight during this time was the Championship Show held at the Marylebone Youth Centre in London in 1963. A dinner was held afterwards at the Rembrandt Hotel which included a slide show. Many overseas visitors attended both the Show and Dinner.

The Members Limited Show was held in London until 1970 when it transferred to Ludgershall in Wiltshire. This move West continued with the Championship Show transferring to Minstead Hall in 1971. This is a lovely venue in the heart of the New Forest where this Show has remained until 2013. An Open Show was also run in conjunction with the New Forest Canine Society at Brockenhurst and this link continued with them until 2013. The Members Limited Show moved to Dummer in Hampshire in 1981 and then on to Bradfield Southend, near Reading in 2005. In 2013 this show and the AGM moved to Steventon in Oxfordshire. This friendly pre-Christmas Show has for many years also been the occasion of the Society's Annual General Meeting. 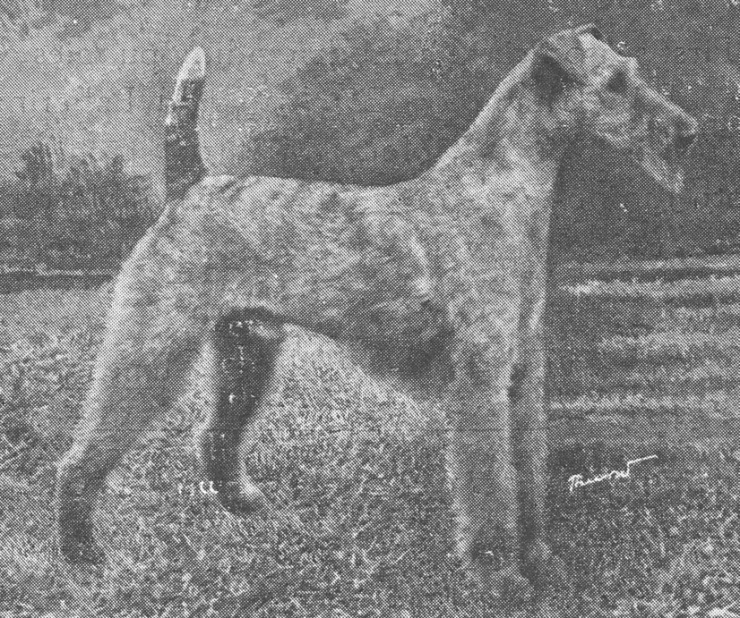 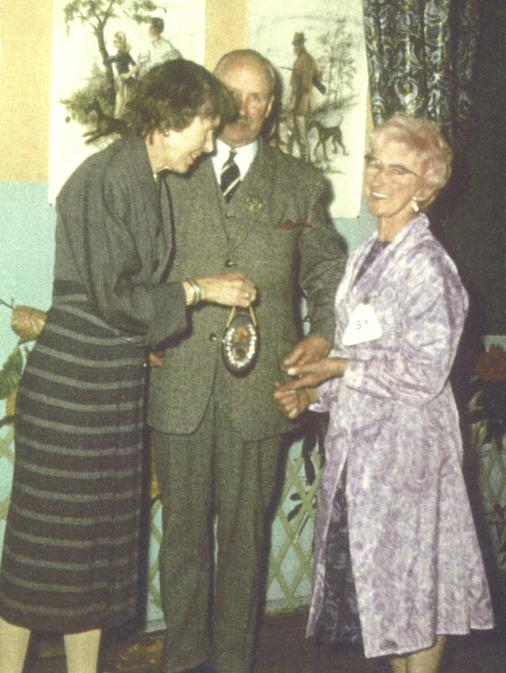 Over a long period Ms Woodifield enjoyed great success in the show ring and left a vPAGE 26 PINK LADY 506x673ery significant mark both on the Society and the breed as a whole. Her first experience with an Irish was handling Eton Boy to his title at Crufts in 1933. This brought the talented handler, who showed on a loose lead, to the attention of the great breeders of the day and she then handled for the Russetone, Merry and Brackenwood kennels. In total she handled over 60 Irish Terriers to their champion title of which around 20 were bred by her (e.g. Ch Pathfinders Drummer Boy, left and Ch Pathfinders Quickstep). It's no wonder that her kennel in Burton Near was referred to as the "Home of Champions" and the Pathfinders affix is found in many famous lines. She inspired and trained some of the top breeders and exhibitors and gained the nickname the "Pink Lady" for her pink hair (seen right with Lady Dent and Mr Hertz at the 1963 Show).

Another significant contributor to the Society and the Breed was Miss F M Simpson (Merrey) who was the President of the Society during the decades of the 40's through to the 1980's. She bred and showed Irish for over sixty years and was even mentioned in F M Jowett's definitive book on the Irish Terrier published in 1931.

In 1978 Ms June Symonds (Gabledown) became Secretary and steered the Society right through until 2002 when Jill Looker (Frostrow) took over the reins. In 1980 an annual Newsletter/Journal was introduced to document the Show results and also to provide more general information for Irish Terrier owners. A Rescue Service, to help re-home Irish Terriers, when the personal circumstances of the owners changed was, also established. This important work is co-ordinated with the other UK Irish Terrier Clubs.

The Society celebrated it's Diamond Jubilee Year in 1991 at the Championship Show in Minstead. All exhibitors were presented with a commemorative Teaspoon, competed for Specials, and enjoyed a glass of wine and a special celebration. The Committee had beautifully decorated the Hall with a banner and a CC Roll of Honour. A Kennel Club Field Officer visited on the day and interrogated the Secretary, Ms Symonds, however thankfully she passed the test! It was also at this Show that the Society badges featuring the Irish Terrier head were first introduced.

Frau Renate Mannhardt (Irish Pirat) of Switzerland was a well known breeder who exhibited across Europe and judged in the UK several times (including at the 1976 SITS Championship Show). She left a generous legacy to the Society in 1998 and the Frau Mannhardt Trophy is still awarded today for the most successful member's dog (exhibited by owner) across the three Society Shows.

Membership of the Club fell in the 80s and 90s and at one point dropped below 50, however this has been growing steadily since and as we reached our 80th Anniversary in 2011 we moved above 100 members. Adapting a current advertising slogan we can therefore say for the Society that "The future's bright - the future's Red" (or is it Wheaten or Red Wheaten?).

The author, Lucy Jackson, became the first Patron of the Society in 2003 and has been an excellent ambassador for the Society and for Irish Terriers generally. In 2005 the Society's Treasurer of 27 years, Pat McBride stood down and sadly died soon afterwards. Pat had grown up with Irish Terriers as both her father and grandfather had owned them. Due to poor eyesight she could never drive and attended all Shows and Committee meetings by public transport. Our current Chairman Ian Bamsey (Holbam) was elected in 2007 and John Nevill took over as Secretary in 2013. Our current Treasurer is Carol Bamsey who took over in 2018.

Today the Society has a membership of 130 and holds three Shows and a Breed Walk each year.

The Annual Breed Walk takes place in May in Windsor Great Park and is always a fun event. The first show on the calendar is the Open Show which is held in June in Southampton. Then there is the Championship Show held the first Saturday in October at Steventon Village Hall, Steventon, Oxfordshire. The final show of the year is the Members Limited Show, held the first Sunday in December at Steventon Village Hall, Steventon, Oxfordshire. The Society's AGM is always held at this event usually before the show begins.